Being Mortal by Atul Gawande 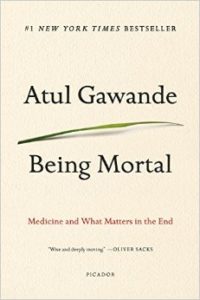 True or false: Modern medicine is a miracle that has transformed all of our lives.

If you said “true,” you’d be right, of course, but that’s a statement that demands an asterisk, a “but.” “We’ve been wrong about what our job is in medicine,” writes Atul Gawande, a surgeon (at Brigham and Women’s Hospital in Boston) and a writer (at the New Yorker). “We think. . .[it] is to ensure health and survival. But really. . .it is to enable well-being. And well-being is about the reasons one wishes to be alive.” Through interviews with doctors, stories from and about health care providers (such as the woman who pioneered the notion of “assisted living” for the elderly)—and eventually, by way of the story of his own father’s dying, Gawande examines the cracks in the system of health care to the aged (i.e. 97 percent of medical students take no course in geriatrics) and to the seriously ill who might have different needs and expectations than the ones family members predict. (One striking example: the terminally ill former professor who told his daughter that “quality of life” for him meant the ongoing ability to enjoy chocolate ice cream and watch football on TV. If medical treatments might remove those pleasures, well, then, he wasn’t sure he would submit to such treatments.) Doctors don’t listen, Gawande suggests—or, more accurately, they don’t know what to listen for. (Gawande includes examples of his own failings in this area.) Besides, they’ve been trained to want to find cures, attack problems—to win. But victory doesn’t look the same to everyone, he asserts. Yes, “death is the enemy,” he writes. “But the enemy has superior forces. Eventually, it wins. And in a war that you cannot win, you don’t want a general who fights to the point of total annihilation. You don’t want Custer. You want Robert E. Lee… someone who knows how to fight for territory that can be won and how to surrender it when it can’t.” In his compassionate, learned way, Gawande shows all of us—doctors included—how mortality must be faced, with both heart and mind. – Sara Nelson