Book Club: The Meaning of Human Existence by E.O. Wilson

Posted on October 11, 2015 by gthumanists_admin 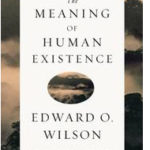 Wilson asks: Does humanity have a special place in the universe? Where are we going, and why? He answers by telling science’s latest creation stories, and presenting a vision of the future both inspiring and plausible, not an easy feat to pull off… Wilson is both a wild-eyed optimist and a hard-nosed realist. What more can we ask of a prophet? (John Horgan – Scientific American)

E. O. Wilson is Darwin’s great successor, a scientist of such astounding breadth, depth, experience, and brilliance that he offers us nothing less than a new understanding of humanity… You will see the beauty, mystery, and possibilities of human existence through the eyes of one of humanity’s greatest and most intrepid explorers. (Jeffrey D. Sachs, Director of the Earth Institute at Columbia University)[A] tough-minded little primer-cum-manifesto… Compact and readable. (Dan Cryer – Boston Globe)There can be few better guides through our species’ past journey and potential for the future… A provocative and beautifully written collection of essays. (Tim Lenton – Nature)No biologist has been more persistent or eloquent in correcting our misapprehensions about human origins than Edward O. Wilson… We should be grateful that Wilson, so late in his illustrious career, still appeals to reason and imagination in hopes of enlightening us about our nature and inspiring us to change our destructive ways. (Scott Russell Sanders – Washington Post)

Edward O. Wilson is widely recognized as one of the world’s preeminent biologists and naturalists. The author of more than twenty books, including The Creation, The Social Conquest of Earth, The Meaning of Human Existence, and Letters to a Young Scientist, Wilson is a professor emeritus at Harvard University. The winner of two Pulitzer Prizes, he lives in Lexington, Massachusetts.