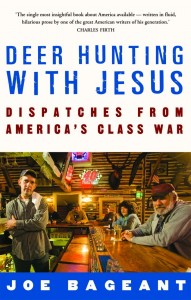 A raucous, truth-telling look at the white working poor-and why they hate liberalism.

Deer Hunting with Jesus is web columnist Joe Bageant’s report on what he learned when he moved back to his hometown of Winchester, Virginia, which-like countless American small towns-is fast becoming the bedrock of a permanent underclass. By turns brutal, tender, incendiary, and seriously funny, this book is a call to arms for fellow progressives with little real understanding of “the great beery, NASCAR-loving, church-going, gun-owning America that has never set foot in a Starbucks.”

Joe Bageant is in good company this week (January 2014) as his book Deer Hunting with Jesus was chosen as one of six “Best books” by U.S. Representative Keith Ellison, D-Minn. The recognition was in THE WEEK, a weekly British news magazine which also publishes a US edition.

The other five books and their authors are:

The Autobiography of Malcolm X by Malcolm X and Alex Haley.

The Warmth of Other Suns by Isabel Wilkerson.

Who Stole the American Dream? by Hedrick Smith.