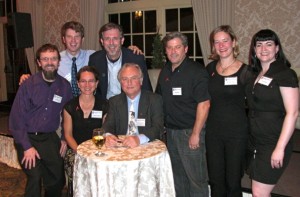 Members of the Grand Traverse Humanists met world-renowned evolutionary biologist Richard Dawkins!  Mr. Dawkins, author of such best-selling books as The Blind Watchmaker and The God Delusion, has written another terrific book, this one aimed at pre-teens and above: The Magic of Reality.  As part of his tour promoting the book, he spoke at a fundraiser for Michigan’s Center for Inquiry in Rochester.  It was an honor and a pleasure to have the opportunity to meet and speak with Professor Dawkins, one of the world’s leading proponents of reason and science.  Check out his website (and his excellent new book) here.

And, on a related note…

The American Humanist Association is sponsoring an ad campaign this holiday season with ads on buses and in newspapers, and it is unfortunately apropos to what happened in conjunction with Dawkins’ appearance in Michigan. In a scandal that acquired the moniker “Wyndgate-gate” (so-dubbed by that night’s attendees), the location for Dawkins’ fundraising appearance in Michigan had to be changed at the last minute after the owner of The Wyndgate Country Club (the original location) decided he “did not wish to be associated with Dawkins, or his philosophies” and canceled the contract.  He made this decision after seeing Richard Dawkins interviewed on the O’Reilly Factor a few days prior.

Though The Wyndgate is a privately-owned business, their meeting room is “open to the public for special events and occasions.” As Hemant Mehta explains in (and by way of introduction to) his great blog, Friendly Atheist, “That means they can’t reject Jewish people who want to hold a wedding there, or an African-American family holding a reunion party … and they shouldn’t be rejecting an author’s book tour event because he happens to be an atheist.” Center for Inquiry is, of course, pursuing legal action in this case.  Stay tuned.