An SGB Interview with Vyckie Garrison of No Longer Quivering 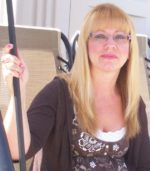 Vyckie Garrison runs a website called No Longer Quivering, which assists women in transitioning from abusive, oppressive and servile roles as breeding servants of husbands and an interpretation of the Bible called The Quiverful movement. The site features the stories of women and families, told in their own words – about the harsh price paid by women and children in oppressive, strict religion. Most of the stories are painful to read, but I encourage you to read them. The knowledge of what these women go through in order to provide healthy lives for themselves and their children – is breathtaking. Vyckie also operates a site called The Take Heart Project, to support women in all religions who seek to free themselves of oppression, brutality & dehumanization in the name of a god.

I invited Vyckie to be interviewed here on SGB because her story is a powerful one, which is shared in full or in part by a great many women across the globe.

This entry was posted in Reproductive Freedom. Bookmark the permalink.