Good without God: What a Billion Non-Religious People Do Believe by Greg Epstein 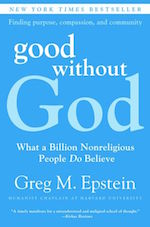 In his first book, Epstein (humanist chaplain, Harvard Univ.) ambitiously attempts to present humanism as a positive life stance that consists of much more than just the absence of belief in a deity by combining history, philosophy, inspiration, and personal confession and generously sprinkling literary, philosophical, and pop cultural illustrations throughout. Opposing the two extremes of the new atheism and religious fundamentalism, he carves a middle path alongside religious moderates. By focusing on ethics and action rather than theology and belief, Epstein’s vision is highly inclusive and emphasizes the vast common ground between the religious and nonreligious without diminishing or compromising the obvious differences. In this passionate collection of thoughts and ideas, he endeavors to educate the religious about the true nature of humanism and to inspire the nonreligious to consider constructively what they do believe rather than what they do not. …….., this is recommended for anyone interested in a positive and more tolerant contribution to the current God debate. Brian T. Sullivan, Alfred Univ. Lib., NY

Watch a short video promo with author Greg Epstein for Good Without God: What a Billion Non-Religious People Do Believe