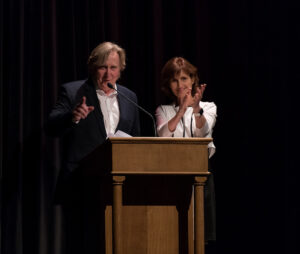 Grand Traverse Humanists present Doug and Anne Stanton with a talk about the National Writers Series. They’ll discuss founding and running this nonprofit and what it’s meant to them and the community. NWS is a year-round book festival which also works to build student reading and writing skills by offering poetry workshops at Traverse Heights and Blair Elementary and Battle of the Books, a reading competition for hundreds of area children. NWS also helped found Front Street Writers, a professional writing class held in partnership with the TBA-ISD.

Doug is a New York Times bestselling author of Horse Soldiers, which was made into a Jerry Bruckheimer film and renamed 12 Strong. He also wrote In Harm’s Way and The Odyssey of Echo Company. Prior to writing books, Doug wrote for national magazines, including Outside, Men’s Journal and Esquire.

Anne is a former reporter for the Sacramento Bee, Traverse City Record-Eagle, and Northern Express. She recently stepped down as the executive director of the National Writers Series after serving for five and a half years. She now freelance writes and serves as editorial director at Mission Point Press.

This meeting will be held virtually via Zoom. Click here to register for this free meeting, and receive your own unique link to join.