Meeting at the Library: Bill Rapai on the Kirtland’s Warbler

Posted on December 10, 2019 by Linnaea Melcarek 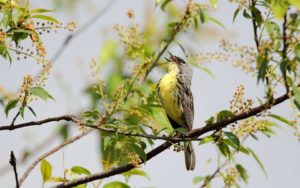 Grand Traverse Humanists present Bill Rapai with a talk called “The Kirtland’s Warbler: From the brink of extinction to a secure future.”
In October 2019, the U.S. Fish and Wildlife Service officially removed the Kirtland’s Warbler from the Endangered Species List. Ironically, even though the warbler’s population is healthy and sustainable at about 5,000 individuals, humans will still need to intervene on its behalf to ensure its survival for as far as we can see into the future. Learn about the fascinating history of this iconic species, recent breakthroughs in knowledge, new ways of approaching Kirtland’s Warbler conservation, and the challenges that need to be overcome as we move forward.

Bill Rapai is chair and acting executive director of the Kirtland’s Warbler Alliance. He has traveled across North America and to Cuba, the U.S. Virgin Islands, Iceland, Europe and Asia to view and research birds. He was an award-winning reporter and editor for the Grand Forks (N.D.) Herald, the Detroit Free Press, and the Boston Globe and is the author of three books.

This entry was posted in Upcoming Events, What's New. Bookmark the permalink.