Meeting at the Library: “Cuba: Why Can’t We Just Move Forward?”

Posted on September 26, 2019 by Linnaea Melcarek 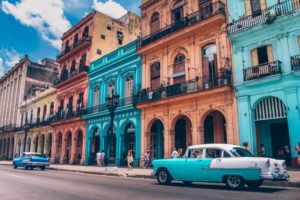 Grand Traverse Humanists present a talk with Karen Puschel Segal on U.S.-Cuban relations. For sixty years, the relationship has been plagued by distrust and antagonism. Hoping to thwart Fidel Castro, successive U.S. administrations have tried to isolate the island country economically and diplomatically. In fact, the U.S. has sanctioned Cuba longer than any other country. Hopes were raised under President Obama that maybe it would be possible to put the past behind and start again to find ways to cooperate. Alas, President Trump has put those nascent hopes to rest by exerting “maximum pressure,” including further limits on U.S.-Cuban contacts.
Why is it proving so difficult to overcome the legacy of U.S.-Cuban relations? And what might we expect looking ahead?

Join Karen Puschel Segal for a lively discussion of this most interesting – and thorny – relationship! Karen and fellow diplomat (and husband) Jack traveled to Havana recently as part of a World Affairs Council trip, led by a former U.S. Ambassador.

Karen Puschel Segal began her career as an analyst of Soviet affairs at the State Department and later served in Moscow and Yekaterinburg, Russia and in Geneva at the Strategic Arms Reduction Talks. Karen is a Council on Foreign Relations scholar and the author of U.S.-Israeli Strategic Cooperation in the post-Cold War Era, as well as various articles. Karen has always been an ardent volunteer, heading various charitable organizations while living in the Netherlands. She recently stepped down as co-chair of the International Affairs Forum in Traverse City.

This entry was posted in Upcoming Events, What's New. Bookmark the permalink.