Posted on August 1, 2019 by Linnaea Melcarek 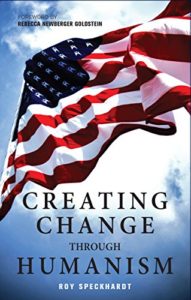 Humanism is “the radical idea that you can be good without a god.” That’s how Roy Speckhardt, the longtime executive director of the American Humanist Association, defines it. His new book, “Creating Change Through Humanism,” lays out how and why people can lead moral and ethical lives without belief in a higher power. While surveys show that more and more Americans are giving up on religion, merely abandoning traditional religious faith is just one step on a path to a better way of thinking. Speckhardt explains how to take the next steps with the empathy and activism that characterize humanism today.

Humanism has inspired generations of individuals to improve themselves, their communities and their country. “Creating Change Through Humanism” describes how a humanist life-stance has influenced and can continue to advance acceptance, diversity and equality. Humanist ideals pervaded the U.S. from its founding, starting with the innovative idea of separating church and state to maintain a religiously-neutral government. Humanism has continued to propel our nation toward social progress by promoting basic human rights and dignity. The humanist movement, with its forward-thinking outlook and emphasis on critical thinking and self-reflection, has been at the forefront of such pressing social issues as civil rights, women’s rights, LGBTQ equality, responsible scientific freedom, and the environment and population dynamics.

Speckhardt interweaves personal stories, including his own, of individuals who have journeyed from organized religion to humanistic convictions. He encourages his readers to be open about their own lack of belief and to become active in social and political causes, so they can put their positive values into action and combat the anti-humanist prejudice propagated by the religious right.

Reviews:
“It’s hilarious that we live in a world where someone has to defend humanism. Who is against the humanists? Unfortunately, far too many on the planet fight against reason and logic. Roy fights back with an excellent argument that defends humanism and makes a great case for coming out as a non-theist. The world would be a little bit more rational if we all listened to Roy’s points.”
–Cenk Uygur, host of The Young Turks and founder/CEO of TYT Network
“In his ambitious and engaging work, Creating Change Through Humanism, Roy Speckhardt others a deeply informed survey of the vibrant humanist landscape. Linking humanism to our embrace of democracy, as well as individual, social, and human rights, he explores how the ideas and philosophies may be applied to modern issues and challenges, both political and personal. A thoughtful and important contribution to the canon.”
–Katherine Stewart, author of The Good News Club: The Christian Right’s Stealth Assault on America’s Children
“Roy Speckhardt’s book is a compelling invitation for people to engage actively in social and political life as humanists. Creating Change Through Humanism will speak powerfully to the hearts and minds of tens of millions of Americans who may not have a church but definitely have a calling to participate as citizens and moral actors in the challenges of our time. Roy Speckhardt has an important and urgent message.”
–Jamie Raskin, professor of constitutional law at American University and Maryland State Senator
This entry was posted in Book Club. Bookmark the permalink.