Book Club: Killers of the Flower Moon by David Grann

Posted on November 12, 2018 by Linnaea Melcarek 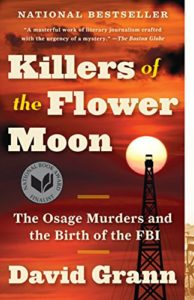 Killers of the Flower Moon by David Grann

GT Humanists Book Club will gather to discuss the book Killers of the Flower Moon by David Grann.

The Amazon Editors’ Pick for the Best Book of 2017: In the 1920s, the Osage found themselves in a unique position among Native Americans tribes. As other tribal lands were parceled out in an effort by the government to encourage dissolution and assimilation of both lands and culture, the Osage negotiated to maintain the mineral rights for their corner of Oklahoma, creating a kind of “underground reservation.” It proved a savvy move; soon countless oil rigs punctured the dusty landscape, making the Osage very rich. And that’s when they started dying.

You’d think the Osage Indian Reservation murders would have been a bigger story, one as familiar as the Lindbergh kidnapping or Bonnie and Clyde. It has everything, but at scale: Execution-style shootings, poisonings, and exploding houses drove the body count to over two dozen, while private eyes and undercover operatives scoured the territory for clues. Even as legendary and infamous oil barons vied for the most lucrative leases, J. Edgar Hoover’s investigation – which he would leverage to enhance both the prestige and power of his fledgling FBI – began to overtake even the town’s most respected leaders.

Exhuming the massive amount of detail is no mean feat, and it’s even harder to make it entertaining. But journalist David Grann knows what he’s doing. With the same obsessive attention to fact – in service to storytelling – as The Lost City of Z, Killers of the Flower Moon reads like narrative-nonfiction as written by James M. Cain (there are, after all, insurance policies involved): smart, taut, and pacey. Most sobering, though, is how the tale is at once unsurprising and unbelievable, full of the arrogance, audacity, and inhumanity that continues to reverberate through today’s headlines. –Jon Foro, The Amazon Book Review

DAVID GRANN is a #1 New York Times bestselling author and a staff writer at The New Yorker magazine. He is the author of “The Lost City of Z” and a National Book Award finalist for “Killers of the Flower Moon,” both of which were chosen as one of the best books of their respective years by The New York Times, The Washington Post, and other publications. He is also the author of “The Devil and Sherlock Holmes: Tales of Murder, Madness, and Obsession” and “Old Man and the Gun: And other Tales of True Crime.” Several of his stories, including “The Lost City of Z” and “Old Man and the Gun,” have been adapted into major motion pictures. And his work has garnered several honors for outstanding nonfiction, including a George Polk Award, an Edgar Award, and a Spur Award.

This entry was posted in Book Club, What's New. Bookmark the permalink.