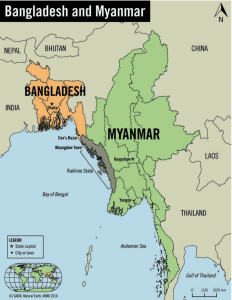 Golam Rabbani is a human rights activist from Bangladesh. Rabbani was a lawyer by profession in the Supreme Court of Bangladesh. He was involved in social work and has written columns for national daily newspapers. In Bangladesh, he ran for office, was harassed by police to the point of sustaining injuries including a broken arm and leg and has spent time in jail there. Fearful for his life, he and his family fled his country and now live in Traverse City.

Rabbani will speak to us about his own experience as a refugee. He’ll also talk about the Rohingya people, an ethnic minority who are being persecuted in Myanmar (Burma), many of whom have fled to neighboring Bangladesh and live in deplorable conditions in refugee camps.