The Hitchhiker’s Guide to the Galaxy, by Douglas Adams

Posted on November 6, 2017 by Heather Kingham 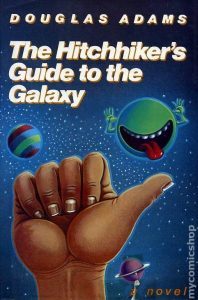 Join Douglas Adams’s hapless hero Arthur Dent as he travels the galaxy with his intrepid pal Ford Prefect, getting into horrible messes and generally wreaking hilarious havoc. Dent is grabbed from Earth moments before a cosmic construction team obliterates the planet to build a freeway. You’ll never read funnier science fiction; Adams is a master of intelligent satire, barbed wit, and comedic dialogue. The Hitchhiker’s Guide is rich in comedic detail and thought-provoking situations and stands up to multiple reads. Required reading for science fiction fans, this book (and its follow-ups) is also sure to please fans of Monty Python, Terry Pratchett’s Discworld series, and British sitcoms.

Don’t panic! Here are words of praise for The Hitchhiker’s Guide to the Galaxy!

“The feckless protagonist, Arthur Dent, is reminiscent of Vonnegut heroes, and his travels afford a wild satire of present institutions.”

“Very simply, the book is one of the funniest SF spoofs ever written, with hyperbolic ideas folding in on themselves.”

“As parody, it’s marvelous: It contains just about every science fiction cliche you can think of. As humor, it’s, well, hysterical.”