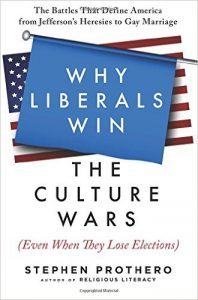 Headlines scream that the United States is stuck in the middle of an un-precedented, unsolvable, and vicious political war, pitting Right against Left, Tea Party against progressives, religious against secular. As these battles rage, many worry whether we will survive the cultural fragmentation and political polarization. And this is where Why Liberals Win the Culture Wars (Even When They Lose Elections) offers good news. Stephen Prothero, the New York Times bestselling author of Religious Literacy and God Is Not One and Boston University professor of religion, argues that these divisive debates are how Americans have always worked out their thorniest issues.

Prothero reveals that “culture wars” are not a modern invention. They have been the mechanism by which the nation continually wrestles with, and expands on, what it means to be American. After recounting the history of the culture wars that have both rocked and shaped our national identity—from Jefferson’s contested election in 1800 to debates over Catholics, Mormons, prohibition; from abortion to struggles over gay marriage today—Prothero concludes that these conflicts follow the same cycle: Conservatives initiate a war by rallying an anxious electorate to a “cause.” Capitalizing on fear and frustration, conservatives often win the elections but, surprisingly, almost always lose the culture wars. Why? Because they choose causes that are already lost. Solving this historical puzzle, Prothero explains, empowers us to dull the sharp edges of religious and political extremism and advance the winning cause of liberty itself.

“Brilliantly shows how the same groups drive conflicts year after year—and how the results eventually make us stronger. Instructive reading for all voters.”—Kirkus (starred review)

“A lively, highly readable, and thought-provoking analysis of how culture wars arise, how they are fought, and how they end. Both sides can learn much from this volume.”—Douglas Laycock, professor at the University of Virginia Law School