Posted on January 4, 2015 by gthumanists_admin 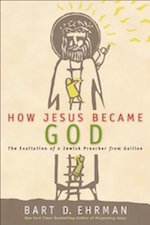 The claim at the heart of the Christian faith is that Jesus of Nazareth was, and is, God. But this is not what the original disciples believed during Jesus’s lifetime—and it is not what Jesus claimed about himself. How Jesus Became God tells the story of an idea that shaped Christianity, and of the evolution of a belief that looked very different in the fourth century than it did in the first.

**Read any of Bart Ehrman’s books on historical Jesus, or watch one of his lectures on youtube**