Meeting at the History Center: Isiah Smith on Economic and Racial Discrimination in the Criminal Justice System

Posted on December 3, 2014 by gthumanists_admin

Meeting at the History Center: Isiah Smith on Economic and Racial Discrimination in the Criminal Justice System

MacArthur Foundation “Genius Award” recipient Bryan Stevenson writes in his compelling new book, Just Mercy that each of us is more than the worst thing we’ve ever done.  Too often it seems, however, that our criminal justice system has adopted the opposite view: Each one of us is worse than the best thing we’ve ever done.  Thus, to be caught up in the American Justice system is to be treated as lacking in basic humanity.  Therefore, whatever is done to any of us in the name of keeping the peace is OK, so long as it promises to keep us safe.

When we allow ourselves to not be deceived by what we read in the newspaper, or what politicians with an ideological mission tell us, we find that we have been misled by what passes for justice.  From three-strike laws, to draconian drug laws, to corrupt judges, law enforcers, and Supreme Court Justices, we have allowed the thirst for revenge and retribution to supplant justice, mercy and fundamental fairness.  How else to explain Justices Scalia and Thomas’ dissent in In re Davis stating that the Constitution does not forbid the execution of an innocent man?  There is, however, room for hope, and optimism, and that hope and optimism can be found reflected in an activist Humanistic Manifesto that values action over words. 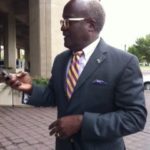 Isiah Smith, Jr. received undergraduate and graduate degrees in Psychology from the University of Miami. He has worked as a newspaper columnist, social worker and a psychotherapist.  In his thirties he enrolled in the University of Miami’s Law School where he served as the Editor of the Law School Newspaper and a member of the International Law Journal. In 2013, he retired from a cabinet level Federal Agency where he served as a Deputy Assistant General Counsel for 20+ years.  Since moving to Traverse City from the Washington, DC area he has devoted himself to writing and furthering his interest in the study an eclectic blend of legal history, Civil Rights and economic theory. Informed by his personal and professional experiences, his presentation provides a fascinating glimpse into the impact of history, economics and law on social justice.