Meeting at the History Center: Mella McCormick and Chris Kuchuris: Evolution of Morality

Posted on March 4, 2014 by gthumanists_admin 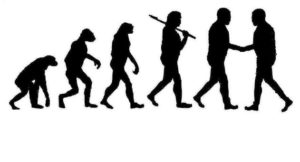 Pulling the plug on a brain-dead person on life-support, altering the genetic make-up of an embryo, using sophisticated software to surreptitiously collect information on citizens, deploying ‘assassin drones’ in a far off country: these are but a few of the moral dilemmas facing modern man. When confronted with difficult situations we often wonder; what is the right thing do? To answer this age-old question humans have turned to many sources from appeasing the gods, to following the 10 Commandments, to satisfying our Pleasure Principle, to seeking the greatest good for the greatest number.

Yet all of these sources of so-called wisdom are inadequate as guides for moral action for they provide no way of assessing particular situations and all moral choices are done in the particular, not the general. Appease the gods says Homer: which ones? Thou shalt not murder commands Moses: okay, but when does the taking of life rise to the level of murder? Satisfy your pleasure-principle urges Freud: but what about the unintended consequences? Do the greatest good for the greatest number counsels Bentham: but who determines the greatest good?

As such, any circumstance we encounter does not come pre-labeled as morally loaded; all circumstances must be interpreted individually as we encounter them so we need to ask, what part of us does this interpreting, for the accuracy of our interpretations determines how well we can make choices to manage any moral conundrum we may encounter.

In our presentation we will challenge some of our most basic assumptions regarding the traditional, as well as contemporary sources of our ethical decisions and we will provide a workable alternative in showing how our ability to reason is all we need in setting the frame of reference for our moral compass.

Mella McCormick is a philosophy professor at Northwestern Michigan College.  She completed her undergraduate studies at Ball State University in Muncie, Indiana and Keele University in Staffordshire, England.  She attended the University of Missouri-Columbia for her graduate work in philosophy. Prior to teaching in Michigan, Mella taught both philosophy and women’s studies at the College of Southern Nevada in Las Vegas where she authored and chaired the Associate of Arts degree in Women’s Studies. Her most recent publication is The Danger of Relativism in Reason in The International Journal of Arts & Sciences, Fall 2013 which she co-authored with Chris Kuchuris.

Chris Kuchuris earned his Bachelor’s Degree in Philosophy from DePaul University in Chicago, Illinois. He also attended graduate school there and at the University of Nevada, where he obtained a Master’s Degree in Ethics and Policy Studies. He has been working in philosophy for the past 22 years teaching classes in Ethics, Critical Thinking, and Existentialism at the College of Southern Nevada. Chris has published a textbook titled Puncturing Our Illusions: Developing Our Critical Thinking Attitude.  His most recent publication is The Danger of Relativism in Reason in The International Journal of Arts & Sciences, Fall 2013 which he co-authored with Mella McCormick.