Posted on January 29, 2013 by gthumanists_admin 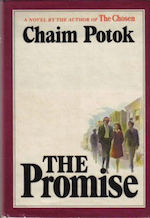 Reuven Malter lives in Brooklyn, he’s in love, and he’s studying to be a rabbi. He also keeps challenging the strict interpretations of his teachers, and if he keeps it up, his dream of becoming a rabbi may die.

One day, worried about a disturbed, unhappy boy named Michael, Reuven takes him sailing and cloud-watching. Reuven also introduces him to an old friend, Danny Saunders–now a psychologist with a growing reputation. Reconnected by their shared concern for Michael, Reuven and Danny each learns what it is to take on life–whether sacred truths or a troubled child–according to his own lights, not just established authority.

In a passionate, energetic narrative, The Promise brilliantly dramatizes what it is to master and use knowledge to make one’s own way in the world

“A profound, moving book…refreshing, inspiring” —The Wall Street Journal“A superb mirror of a place, a time, and a group of people who capture our immediate interest and holid it tightly.” —The Philadelphia Inquirer“The characterizations are vivid, the incidents dramatic, the narrative fluid. . . . Overall . . . a glow of human erudition and compassion.” —Washington Post Book World“Brilliantly and intricately conceived. . . . The Chosen established Chaim Potok’s reputation as a significant writer. The Promise reaffirms it.”–The New York Times Book Review