Media Night: Discussion of “The Blood of the Lamb” by Peter De Vries

Posted on September 9, 2012 by gthumanists_admin 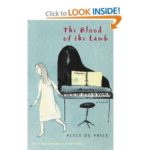 7 p.m….home of DeAnna and Matt Hess (email for directions)

Join us for a discussion of Peter De Vries’ book The Blood of the Lamb. Peter De Vries was an American editor and novelist known for his satirid wit. He has been described by the philospher Daniel Dennett as “probably the funniest writer on religion ever.”

The most poignant of all De Vries’s novels, The Blood of the Lamb is also the most autobiographical. It follows the life of Don Wanderhop from his childhood in an immigrant Calvinist family living in Chicago in the 1950s through the loss of a brother, his faith, his wife, and finally his daughter-a tragedy drawn directly from De Vries’s own life. Despite its foundation in misfortune, The Blood of the Lamb offers glimpses of the comic sensibility for which De Vries was famous. Engaging directly with the reader in a manner that buttresses the personal intimacy of the story, De Vries writes with a powerful blend of grief, love, wit, and fury.