Roundtable Discussion: Current Issues in the Separation of Church and State

Posted on October 3, 2011 by gthumanists_admin 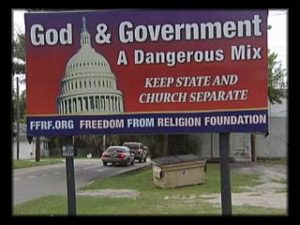 Nov 14 2011: Roundtable Discussion: Current Issues in the Separation of Church and State

You’ve no doubt noticed that some of the presidential candidates have strong religious ties…Rick Perry recently headlined a prayer meeting, flanked by members of the New Apostolic Reformation, who want to “take dominion over politics, business and culture in preparation for the end times and the return of Jesus.” (See Terry Gross’ August interview with Rachel Tabachnick, who researches the political impact of the religious right, and also her October 3 interview with C. Peter Wagner, one of the New Apostolic Reformation’s leaders.) Meanwhile, in Louisiana, a high school student was ostracized after he requested that official prayer not be part of his graduation ceremony. Is the United States truly a secular democracy? Join us for a discussion of current issues in the separation of church and state.